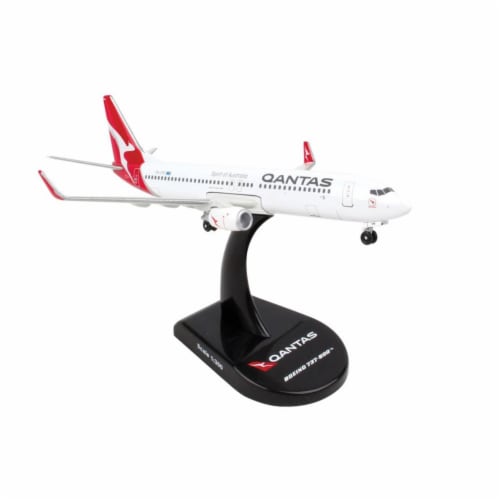 This Die cast metal airplane model comes in 1 300 scale with plastic stand The 737 800 is a stretch version of the 737 Next Generation of short to medium range narrow body jet airliners It replaced the older 727 200 and the discontinued McDonnell Douglas MD 80 on most North American fleet The 800 entered service in 1998 Founded in 1920 Qantas Airways is the flag carrier of Australia and is the third oldest airline in the world QANTAS is the acronym for its original name Queensland and Northern Territory Aerial Services It s distinctive red tail logo earned it the nickname The Flying Kangaroo The 737 800 is the workhorse of the mainline Qantas fleet with 75 flying the domestic and trans Tasman routes Qantas unveiled it s new livery featured here in 2017 Specifications . Length 5 1 2 . Wingspan Size 4 1 2 . Material Metal Plastic. Scale 1 300